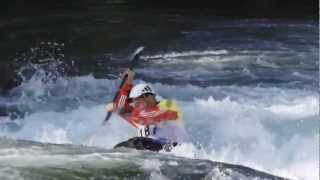 The ultimate whitewater competition is coming to the Nantahala River on September 2–8, 2013 — the International Canoe Federation’s (ICF) Canoe Freestyle World Championships. This premier freestyle kayak event is slated to draw over 300 top freestyle paddlers from around the world, as well as thousands of spectators here, to the Nantahala Gorge, in the heart of the North Carolina Smokies. The 2013 Wave is the centerpiece of the Nantahala freestyle kayaking venue. It is created by a Wave Shaper, an underwater concrete structure that alters water flow, enhancing the existing drop at that point of the river and creating a word-class competitive feature. Learn more:

A Successful World Cup – On September 9, the 2012 ICF Canoe Freestyle World Cup Series came to a spectacular conclusion with down-to-the-wire victories in both the men’s and women’s K1 classes.