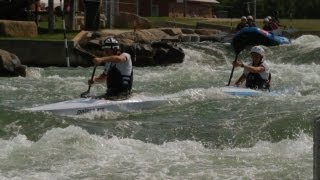 It’s as basic as walking for whitewater paddlers… the deceivingly simple forward stroke. But the forward stroke is more complicated than it looks and mastering the skill is essential to success on the water.

Founded in 1894 and headquartered in Colorado Springs, CO, the United States Olympic Committee serves as both the National Olympic Committee and National Paralympic Committee for the United States. As such, the USOC is responsible for the training, entering and funding of U.S. teams for the Olympic, Paralympic, Youth Olympic, Pan American and Parapan American Games, while serving as a steward of the Olympic Movement throughout the country. For more information on the USOC and learn more about our athletes, log on to the official website at www.teamusa.org