Feral Hogs Are Tearing Up Texas, So Tourists Are Shooting Them from Helicopters 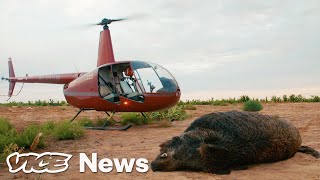 “Legit question for rural Americans,” Twitter user William McNabb asked in August in response to a question about assault weapon use, “How do I kill the 30-50 feral hogs that run into my yard within 3-5 mins while my small kids play?”

The internet shortly exploded with feral hogs and the oddly specific invasion of 30 to 50 hogs became a viral internet meme. What started as a debate around one of America’s most polarizing topics — assault weapons — became many people’s introduction to a very different problem: Feral hogs are one of the most destructive invasive species in the U.S.

And Texans, in particular, come face-to-face with a lot more than 30 to 50 feral hogs, but it’s no laughing matter. That’s why they’re dealing with the crisis in a very Texas way, Helicopter Hunting.