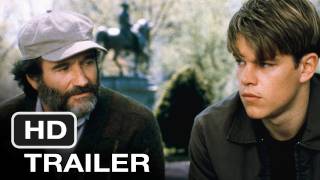 Will Hunting (Matt Damon) is twenty years old, and already stands out in his rough, working-class neighborhood in South Boston. He’s never been to college, except to scrub floors as a janitor at MIT. Yet he can summon obscure historical references from a photographic memory, and almost instantly solve math problems that frustrate Nobel Prize winning professors. The one thing this remarkably bright, impossibly angry young man can’t do – after his latest bar fight – is talk his way out of a pending jail sentence. His only hope is Sean McGuire (Robin Williams), a college professor-turned-therapist with an admiration for Will’s emotional struggles, and a keen understanding of what it’s like to fight your way through life.