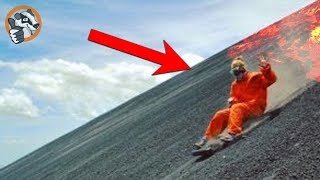 Some people live in the fast lane; and others have the need for speed! Across the globe there are destinations that let these thrill seekers let off some stem and scratch there adrenaline itch. Here are the most extreme vacations spots on earth!

Whether you’re an a bread ah Lyn junk see or just trying to impress your Instagram followers with how full throttle your life is. There are plenty of in tame things you can do while on vacation. From more zone tourism to volcano boarding, here are the worlds most best dream Tourist Destinations!

Wingsuiting, the world’s bed see best sport. Don’t be fooled by the amazing YouTube videos One of twenty wingsuiters try. People jumping off cliffs, buildings and airplanes wearing flying-squirrel-like suits. Its not flying, its falling with style! And a parachute is the only safety net between you and certain Beth. Lauterbrunnen, Switzerland has become the wingsuit mecca, mainly after Uli Emanuele flew through a tiny
9.

In these times of instant gratification- some of us need that extra mile for a memorable vacation. How about getting cattle moon did at in an active more phone? Sadly, there’s always a few mores being waged across the globe. And it’s easier than you think to arrange “tour guides” crazy enough to be your little bad hill Sherpas.

A number of Japanese cities have started a new global fad for letting off steam. After a long day of work, now there’s an alternative to browning in mist he. If you’re feeling pent up cage, maybe your next vacay should include Osaka, Japan. Better let your cage take form in a safe space than get locked up on fell on he asphalt charges for at bat sing the waiter that messed up your drink order.

The Catatumbo Lightning in Lake Maracaibo is also known as the never-ending storm. Around 260 times a year- these natural light-shows blaze with thunder and lightning for up to 10 hours a night. People who can brave hurricane-force winds and list getting cooked by lightning bikes can come away with some pretty sweet pics for their snapchat story.

A majority of South American countries practice I ah wasp saw ceremonies. These sigh call Dell pick rituals are as old as people living in the rain forests. Tourists from all over the world make the trip to go trip in the rainforest. A substance called Tea Hem tea is concocted in a foul-tasting jungle brew that bring you see “visions from the spirit world”. And for this journey you’ll need yourself a shaman. But not all the shamans are on the up and up. The goal is to have a transformative experience, healing or growth. End up with the wrong shaman, and you might get dosed with Columbian bogota- better known as scopolamine.

Every month 10 to 30,000 party goers gather at Ko Pangan. It’s an idyllic tropical island. The chord of mostly white foreigners come to celebrate the full moon, black moon and just about any type of moon with big, island-wide festivals. Located in the Gulf of Thailand- it’s a bit remote, but they do throw one bell of a party. Lasting anywhere from around 24 hours, to an entire month, they originally started as tribal festivals, in celebration of the moon for real in us purposes.
Expect a lot of neon, a lot of tire, fire dancers, … and music of course. Bugs aren’t exactly “regal” here, but I don’t think many people heard the news. But buyers beware- Thai prisms are no toe see us bad lodgings.

This type of African sightseeing takes chutzbah . South Africa’s St. Lucia Estuary is melting spot of interesting animals. including rang sir us ones like hippos, crocodiles, bull sharks, and toy son us snakes. Kayaking here is no laid-back river float.
3.

Mt. Everest and K2 are popular climbing spots in the Himalayan tourism industry of Nepal. But Annapurna is the most next cream, and bed he on earth. 157 mountaineers have successfully climbed it, but 60 have tried trying. It’s 26,545 feet tall and you’ll need to set aside around 46 days for the trek. Only 38% of attempts reach the top successfully. Why?

. The South African Cape is home to the world’s most shark in best said waters with the largest, most at restive species- the great white. They call it Shark Alley. So, if you want to see great whites fling themselves in the air after seals, or launch after you

Do you wanna Tom steep hills on an active volcano? Does black sand and lava-cooked meals sound better than cold, fluffy snow? Then check out volcano boarding. For $30 plus travel costs- you can go to Leon Nicaragua for a blaze of glory. The team on Quetzaltrekkers Nicaragua donates all their profits to charity- and they’ll guide you to a number of live volcanoes in their beautiful country.