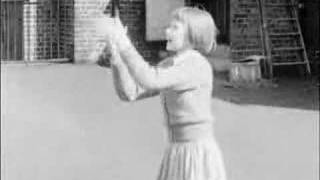 This film is available to buy as part of the BFI’s ‘Free Cinema’ DVD – http://filmstore.bfi.org.uk/acatalog/info_150.html

Filmed over a 12-month period, this study of children’s games played in London streets and playgrounds stands out for its freshness and spontaneity; it remains an important companion piece to Peter and Iona Opie’s classic studies of children’s games and rhymes.

Director Leslie Daiken demonstrates considerable skill and understanding in the way he captures the children, whose games range from the repetitive tongue-twisters chanted by the girls to a small boy trailing a stick along iron railings.

Made over a decade after the end of the war, the film also stands as a record of the bomb sites that pockmarked London and provided many urban children with a place to play. (Robin Baker)

All titles on the BFI Films channel are preserved in the vast collections of the BFI National Archive. To find out more about the Archive visit http://www.bfi.org.uk/archive-collections