Quail Hunting In West Texas Under A Rollercoaster Of Conditions 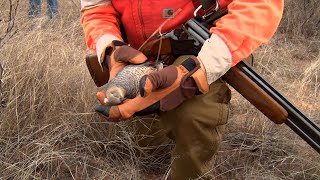 Quail Hunting In West Texas Under A Rollercoaster Of Conditions

This week on Americana Outdoors, we’re in West Texas with Rehan Nana and Steve Snell as they gear up for what’s promising to be a winter whirlwind of a quail hunting experience!  This particular hunt is all about blue quails. Unlike most species of quail, the blue quail prefers to run and flush, as opposed to their counterparts like the bobwhite who prefer to sit and hold tight. Dr. Dale Rollins, a renowned expert in quail conservation, and executive director of the Rolling Plains Quail Research Foundation, describes them as the, “Orphan stepchild of the bird dog hunting world.” This habit introduces a whole new level of difficulty for hunters and their dogs, and sometimes elicits frustration, but there’s one thing that can’t be denied: hunting blue quail is challenging and fun, and when you do get one of these birds, it’s a reward like no other.

To kick things off, Rehan and Steve get an early start and head out into the field before an impending winter storm makes its arrival. On day one of this hunt, these native birds immediately live up to their reputation of being a challenging bird for hunters, and certainly don’t make this hunt an easy one. As time goes on, and with a large amount of patience and determination, our team finally happens upon a few covey of quail and take the opportunity to get these birds down. For Rehan, this is monumental as this marks the first blue quail he’s taken in Texas. After having a pretty difficult last year hunting these birds, Rehan describes this feeling saying, “To have it all come together like this, it’s pretty incredible.”

As we shift into day two, we see one of the most dramatic shifts in weather conditions that we’ve had on the show. A winter storm has blown in, and brought with it roughly three to eight inches of snow. As if hunting blue quails wasn’t challenging enough on a good day, this development generates a whole new set of challenges. Will the new conditions give our team an edge, or will these native birds rise to the occasion and continue to give our team the slip? Tune in and find out!

Americana Outdoors® is one of the longest running outdoors platforms for viewing available today. Seen on numerous television and digital platforms it’s available every days of the week somewhere.

Americana Outdoors is known for featuring a large range of content from some of the most well known destinations, conservation messages, the latest in products, and some of the nation’s top anglers and hunters, while providing the viewing audience with both entertainment and education in every episode.