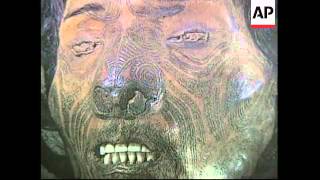 A New Zealand Maori singer is on a head-hunting expedition to New York City.

Dalvanius Prime is appealing to the American Museum of Natural History to return its collection of 35 preserved and tattooed human heads to their country of origin – New Zealand.

Prime is negotiating with the museum, which bought the heads in 1907 from one of his forebears.

The museum, which has not displayed the heads since the 1970s, has not said whether it will agree to return them.

Dalvanius Prime is singing the praises of his ancestors.

As a singer and performer in his native New Zealand he has achieved a certain amount of fame.

He often performs the songs he has written for his fellow Maori tribesmen.

But in the U-S, he has become famous for his fight to free his forefathers – well, their heads anyway.

SOUNDBITE: (English)
“It is part of our pagan past, but you know, we are quite sophisticated people. And thanks to you Westerners, and people like this great institution, who have preserved our cultural history, we are very, very thankful. But you know, we are a very sophisticated race. We are a classic race. Our language is classic, our culture is classic, and so is our art. And that is why you people need to keep our heads, because you are totally fascinated with them, but unfortunately, it is time they came home.”
SUPER CAPTION: Dalvanius Prime, Ethnomusicologist

This is Prime’s eleventh trip to New York City to ask for the release of members of his tribe.

At the turn of the century, the American Museum of Natural History bought 35 of their skulls for a paltry 15-hundred U-S dollars.

Before they were colonised by the English, it was traditional for native Maori tribes to preserve the heads of their slaves – or mokomokai.

They were often kept around the home.

SOUNDBITE: (English)
“The moko on the face of these preserved Maori heads in this museum, they depict the tribal and ancestral history of our people. In other words, as you Americans call them, the genealogy of our people.”
SUPER CAPTION: Dalvanius Prime, Ethnomusicologist

These highly decorated heads were traded to Europeans for what was then a lot of money – often nearly 20 dollars.

The New Zealand government did not want to be reminded of a savage past, Prime says, so they let the tattooed skulls go for a very low price.

The mokomokai are the history books of the ancient Maori tribe.

Intricate designs tell the story of a people who had no written language.

When the 35 heads came to New York they carried a sacred history with them.

But now Prime, whose lifelong dream to return the heads to his native people, feels it is time for them to go back to New Zealand.

According to Maori tribesmen, it is only when the mokomokai make the trip back to New Zealand that they will be able to rest in peace.

SOUNDBITE: (English)
“These heads have not had their spiritual journey. Their spiritual journey is incomplete. OK? Their bones lie back in New Zealand, but their heads are over here. And also, because there is a lot of history that belongs to our tribe, and to our people, OK? And so these things have to be preserved. They are our intellectual copyright.”
SUPER CAPTION: Dalvanius Prime, Ethnomusicologist

When he visits the Museum, Prime greets his preserved tribesmen as if meeting them in person.

He says he often rubs noses with the heads – a traditional Maori greeting.

He is offering an exchange of cultural artifacts if the Museum will return his ancestors.

Negotiations are still going on.