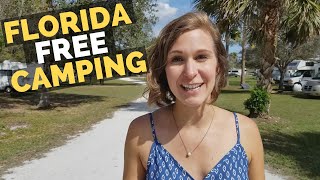 We share some boondocking travel tips on how to get free camping in Florida! As full time RV nomads we’re always looking for campsites along our road trip that won’t break the budget 💰. Living off the grid for a few days in Florida’s Water Management Area is our favorite way to take advantage of the beautiful Florida weather & scenic views while keeping cost to a minimum!