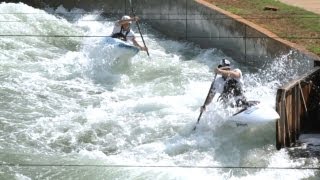 Do you know the difference between the kayak and canoe? Which one would you like to learn to paddle?

In the first episode of “Olympic Coaching Tips: Kayak versus Canoe,” the U.S. Olympic Slalom Team coach Rafal Smolen explains the basic differences between these Olympic whitewater sports, starting with just sitting in the boat.

Founded in 1894 and headquartered in Colorado Springs, CO, the United States Olympic Committee serves as both the National Olympic Committee and National Paralympic Committee for the United States. As such, the USOC is responsible for the training, entering and funding of U.S. teams for the Olympic, Paralympic, Youth Olympic, Pan American and Parapan American Games, while serving as a steward of the Olympic Movement throughout the country. For more information on the USOC and learn more about our athletes, log on to the official website at www.teamusa.org

Email
Posted in Kayaking and tagged canoeing and kayaking in usa