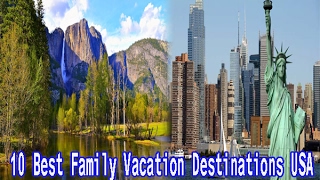 Hello Friends Welcome back to alltop10 videos.We are going to show you 10 Best Family Vacation Destinations USA where you can make your vacation awesome experiance of your life.Create Happy memories with your kids on your next family vacation.Let’s see

The sprawling city of Los Angeles, in Southern California, has long been known internationally in the film and entertainment industry, particularly for Hollywood, a place that has drawn aspiring actors and actresses from across the country for almost a century.
2 San Diego
Sand Diego is Located in Southern California, not far from the Mexico border, San Diego is the oldest town in California, founded in 1769. It has an enchanting natural beauty and a pleasant climate, with mild temperatures and plenty of sunshine. Some of the city’s most popular attractions are the museums, gardens, and Spanish Colonial style architecture found in Balboa Park, the world famous San Diego Zoo, and Sea World which could be favorite destination for your children .

Disneyland, located in Anaheim, is California’s premier family destination and has been for decades. This massive amusement park is home to all kinds of rides, games, shows, and entertainment, complete with restaurants and hotels.

Set along the ocean, with rolling hills and the iconic Golden Gate Bridge, San Francisco is one of the most beautiful cities in the United States and the jewel of Northern California. The city is full of history, great neighborhoods, parks, beaches, museums, and a whole host of entertainment options. Some of the most notable attractions, beyond the famous bridge, are cable cars,de Young Fine Arts Museum,Fisherman’s Wharf and many more

Las Vegas, with its famous Strip. While The Strip is surely a sight to see, Nevada is a state of incredible natural diversity with plenty of opportunities for outdoor activities such as fishing, hiking, mountain biking, horseback riding, and even skiing. Be sure to get out of the city and get lost in Nevada’s stunning wilderness areas as you enjoy all the amazing attractions the state has to offer.

One of the greatest cities in the world, New York is always a whirlwind of activity, with famous sites at every turn and never enough time to see them all. The vacation possibilities in this city are endless. Some people come here to enjoy the Broadway Shows, others come specifically to shop, and many come simply to see the sights; the Statue of Liberty, the Empire State Building, the Brooklyn Bridge, Central Park and many more. Any time of year and any time of day there is an endless array of things to see and do in New York.

A masterpiece created by Mother Nature, the Yosemite Valley is surrounded by sheer granite cliffs that were carved by glaciers millions of years ago. When the naturalist John Muir discovered Yosemite in the 1860s, he described it as the “grandest of all special temples of Nature.” This vast wilderness of 1,200 square miles was designated as a World Heritage Site in 1984 and boasts 800 miles of hiking trails. The highlights of Yosemite are Yosemite Falls, a dramatic waterfall more than 2,000 feet tall, and Half Dome, an iconic sheer-faced granite mountain.
8 .Walt Disney World
This mega amusement park in Orlando is the top family attraction in the country, and has been catering to both young and old for decades. Opened in 1971, Walt Disney World has managed to maintain its relevance and its allure for children and even many adults throughout the years. Walt Disney World Resort encompasses not only the various theme parks, it also includes water parks, Downtown Disney with shopping and theaters, and much more, from fine dining to golf. Although many visitors plan to spend a few days here, it’s possible to spend a week or longer if people want to take in all there is to see and do.

9. SeaWorld San Diego
SeaWorld San Diego is one of the city’s main attractions, particularly for families. It is located along the waterfront in Mission Bay. For many American’s SeaWorld has been a long time family tradition, having been around since the 1960s. Among the highlights are the myriad of shows featuring killer whales, sea lions, dolphins, and other sea life. There are all kinds of rides from roller coasters plowing into water, to more sedate carnival type rides for tots.
10 Disney’s Animal Kingdom
Disney’s Animal Kingdom Lodge is an African-themed deluxe resort at the Walt Disney World Resort. It opened on April 16, 2001. The resort is owned and operated by Walt Disney Parks and Resorts.
our links:
https://www.facebook.com/alltop10s
https://plus.google.com/u/0/114318602807205854393
Tweets by alltoptenz
http://alltop10.in/
Please subscribe my channel to view different types of topics.