The Most LUXURIOUS Vacation Destinations in the World! 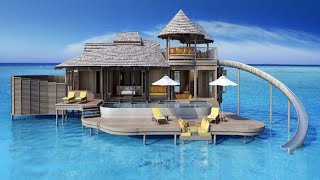 Here are 7 of the most luxurious vacation destinations in the world!

Let’s say you’re in Turkey, and you have some money that’s burning a hole in your pocket. If that’s the case, be sure to check out the Mardan Palace Hotel. This masterpiece of a hotel cost 1.4 billion dollars to build, and was the brainchild of businessman Telman Ismailov. The hotel has 560 rooms, a 12,000 sq ft spa, and its own beach that had 9,000 tons of sand imported from Egypt! Hey, that Egyptian sand is key right? More than 100,000 square feet of gold, 240,000 square feet of Italian marble, and 500,000 crystals were used in the construction of the hotel!

Mardan Palace is also home to the largest swimming pool in all of the Mediterranean. Apparently, more than 1000 guests can splash around in the pool at the same time. At the center of the pool is a seafood restaurant, and it’s surrounded by 4 aquariums that host over 3,000 varieties of fish. The main reason being, food tastes much better when it’s surrounded by 4 aquariums than none, come on! Inside the hotel, you’ll find eye popping interiors of gold leaf, crystal, and Italian marble.

There are also ten gourmet restaurants, 17 bars, and a full-service luxury spa on the property. I think the perk I’d take advantage of the most is the 24/7 personal butler service that’s also included. Those acres of private sandy beaches that’s outside that cost millions of dollars…….yeah, they replace that on a yearly basis to keep it fresh. What kinda sand is this, cat litter?! Oh…did I forget to mention that this resort also has its own zoo? Because, f*ck it, why the hell not?! Might as well go see some exotic animals after throwing back a few drinks on that Egyptian sand!

Atlantis Paradise Island is a luxury resort housed on a 141 acre waterscape. Freshwater and saltwater lagoons run throughout the property, as well as the rope bridges and waterfalls. There are also marine habitats, water slides, river rides, and several sparkling pools that helps guests soak up that island sun.

What sets this place apart from other high class resorts is one of its suites. The Royal Towers Bridge Suite on the 23rd floor is one of the most decadent places in the world. It’s made up of ten rooms, with 12 foot ceilings in each, and full length windows everywhere. There’s a formal dining room, a grand piano, a 22-karat gold chandelier, a 1250 square foot living room, whirlpool tubs, just to name a few things. And of course, in my personal opinion, the best part of staying at a luxury resort. A permanent staff of seven on call to make sure that every need is met.

The view from the suite is also nothing to sneeze at, as the suite is housed on top of a bridge that connects the two Royal Tower Buildings. This suite is up there for one of the most expensive places to stay in the world at an average of 25 thousand dollars a night. This isn’t close to being the most expensive room in the world, but you’ll find out a bit later which hotel that could be at and how high the price can get to stay just 24 hours. But still, 25 thousand dollars is still a lot of money to blow on a hotel. How many times do you think Floyd Mayweather has stayed in this suite?!