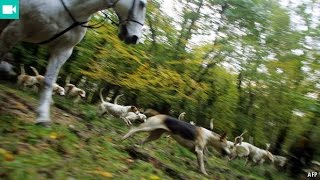 Britain’s parliament banned the use of dogs to kill foxes in 2005. Despite this, the number of people joining hunts is rising.

Hunting foxes with hounds is controversial and animal-rights groups campaigned for years to have it outlawed. Fifty-one percent of Britons support the ban. Now Britain’s prime minister David Cameron wants to relax the ban.

Why do Britons still hunt foxes?

Hunting clubs can still use dogs to flush out foxes from wooded areas. They may then kill them by shotgun or using a bird of prey, once the foxes are in the open. They are not allowed to let their dogs do the killing.

But policing the law is tricky.

Hunt members have managed to keep the pastime alive by sending their dogs after rags scented with fox pheromones. But dogs are dogs. Sometimes they smell a real fox and the huntsmen follow suit. Foxes are still killed by hunting dogs today.

Many farmers and landowners don’t object to hunts passing through their lands. Foxes cause about £12m pounds worth of damage to livestock and crops every year. Rabbits do more damage.

Contrary to stereotypes, hunt members come from all walks of life, which may hint at why it is still at the core of rural life.

A vote on relaxing the ban has been postponed. Scottish Nationalists say that won’t support any change.

Whatever Westminster decides, the fox is a hardy opponent. British foxes have a 60% chance of surviving their first winter, leaving about a quarter of a million of them to roam the lands.

The Economist videos give authoritative insight and opinion on international news, politics, business, finance, science, technology and the connections between them.