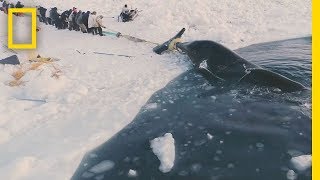 On the sea ice in northern Alaska, the Inupiat wait for the whales. The tradition spans 1,000 years, and a successful catch will feed an entire community for the winter.
➡ Subscribe: http://bit.ly/NatGeoSubscribe
➡ Get More Short Film Showcase: http://bit.ly/ShortFilmShowcase

During whaling season, crew members spend their days watching the icy Arctic water for the right moment to strike. It will take courage and skill to achieve their mission, and they must avoid desperately hungry polar bears along the way. But in the long moments they stand on the ice, protected from the wind inside a fur-lined parka, a timeless gratitude develops. In those moments, the patient act of waiting transforms into a prayer for the whale. Anaiyyun: Prayer for the Whale, from filmmaker Kiliii Yüyan, tells the story of an Inupiat whaling crew that hunts where the vast plain of ice meets the waters of the Arctic Ocean.

About National Geographic:
National Geographic is the world’s premium destination for science, exploration, and adventure. Through their world-class scientists, photographers, journalists, and filmmakers, Nat Geo gets you closer to the stories that matter and past the edge of what’s possible.