How Braniff Went Bust: The Collapse Of The Fastest-Growing Airline In America 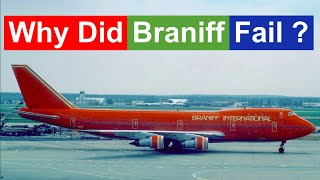 The very simplified story of Braniff International Airways’ downfall. There are MANY factors involved in Braniff’s fall from grace. This video focuses on a few points relevant to the big picture (including American Airline’s sabotage)

Braniff Airways was first launched around 1926 by Paul Braniff. After a few retries, the airline became profitable and begun expanding. Throughout the 30’s and into the 70’s, Braniff became the fastest growing airline in the country. Prior to Airline Deregulation, they were well known for their exceptional onboard service and their route network.

Once deregulation was enacted, Harding Lawrence, the president of Braniff, decided to respond to deregulation by rapidly expanding Braniff’s influence. While the expansion was initially successful, unpredicted competition from other airlines, increased fuel costs, and economic unrest caused Braniff to lose millions.

The company went through a few changes in management, but many factors including pilot strikes, few passengers, declining value of service, and many others lead the airline to cease operations in 1982.

DISCLAIMER
This video is made solely for education/entertainment purposes. No copyright infringement is intended. If you are the owner of any of the copyrighted pictures/clips used in the video and would like them removed, please contact me at realdabomb21@gmail.com . Please see document link provided below for a full list of media sources.

List Of Citations:
Images are licensed under Creative Commons and/or GDFL. See linked document for further information about authors and image links:
https://docs.google.com/document/d/1crCgOZIb7aQyKxzyA8g-eJRjxcQWTrpi-O4xIrkdxEw/edit?usp=sharing