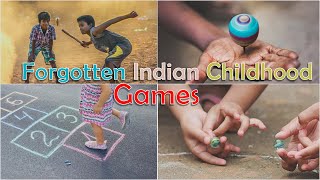 1. Lagori or Pithu
A very popular game among kids in India at one time. It involves a ball and a pile of flat stones (which are stacked on top of each other). One member of a team throws the ball at the stack to knock the stones over. The team then tries to restore the pile of stones while the opposing team ( known as the hitters) throws the ball at them. If the ball touches a person, he is out and his team continues without him.

2. Kancha or Marbles
This is still a popular game among kids in rural areas. The game is played with round glass marbles and the motive is to collect as many marbles as possible by shooting and striking other marbles with the ones you have.

3. Chain
Chain is another classic children’s game, although it is losing popularity now. The game consists of a ‘denner’, whose aim is to catch the other players. Once the denner catches a player, the player becomes part of a chain(which is formed by holding hands) and then has to help the denner in catching the remaining players.

5. Kho Kho
The game consists of two teams, who are required to chase down and tag the players of the opposite team to win the game. The chasing team sends out nine players onto the field, who sit in a straight line with alternate players facing opposite sides. The chasers have to make sure they catch the runners (who enter the field one at a time) before time runs out.

6. Lattoo
Lattoo is a game that involves spinning a wooden top (lattoo), which has grooves in it lower half and a nail at the bottom, on which it spins. A thick string is wrapped around the grooves on lower half and pulling the string makes the top spin.

7. Hopscotch or Stapoo
Hopscotch is a popular playground game in which players throw a small object into numbered spaces of a pattern of rectangles marked on the ground and then hop or jump through the spaces on one or two legs to retrieve the object.

8.Kabaddi
Kabaddi is an Indian origin game that was on its way to extinction, but is now regaining its popularity. There are several forms of the game, but most involve two teams of seven players each, who have a designated area of their own. Players have to raid the other team’s area and try and touch one of their players, hence making the touched player “out.”

9.Dog and the Bone
The game consists of two teams, and an object such as a bottle or handkerchief, etc., which is designated as the “bone.” A player from each team comes forward and attempts to take the bone (placed at the centre of the playing area) back to his team. The player who fails to take the bone has to go out of the game.

10.Maram Pitthi
A game very similar to dodgeball. It consists of two teams, who scatter around in a large area. Players from a team try to hit players of the opposing team with a ball (usually made of sponge). Once a player is hit, he is out of the game. Passing between players of the same team is also allowed.